Well, lambing season is upon us, and this year is particularly exciting for us here at Ye Whispering Pines Farm. It’s exciting because this year is five years in the making. We used two incredible rams last year. Both were fawn katmogets. Why these two rams? Because I think they both rate within the top five Shetland rams I have ever laid my hands on. I have visited 15 farms since we have been in the Shetland business and handled, I don’t know, a thousand sheep? More importantly, perhaps, we have raised Shetlands with all different fleece types (and I do mean all) and these two are the best of the best that we have raised.


I think that’s the exciting part also for us. These two rams are home grown and they came into being as part of a long term plan that has brought us to 2015.


Canterbury is a two year old ram who has a 19 micron fleece with a very low coefficient of variation (around 17%). He’s the finest Shetland that we have raised so far. More importantly, his fleece has the type of uniformity and consistency that we raise here. He is also a very refined ram, almost feminine in appearance. Beautiful head, and just very fine boned. He is out of Winter Sky Khan (one of the finest Shetland rams in the country) and Whispering Pines Pearl, who is a Wintertime Bond daughter. We were very excited to see lambs on the ground from him because of both his bloodlines and his appearance. We would like to have more Shetlands like him, in other words. Plus, he’s mioget. So far, his are the only lambs we have had in 2015, so here is where we are as of today:


Turin (who is out of Winter Sky Vogue (a very nice ewe in her own right) and Sheltering Pines Pompey Magnus. I thought this two year old ewe was pretty special when she was born and she has developed nicely. The thought was that we would combining some pretty excellent bloodlines with this breeding, which should bring us lambs with special qualities. Although, I was correct, I didn’t expect what we got this year.


This fawn katmoget ram is a yuglet sokket with an excellent fleece! As you can see, he’s very flashy, but uniform. He doesn’t fall off in the hips like a lot of Shetlands, and he will be very crimpy. Also, he is polled. 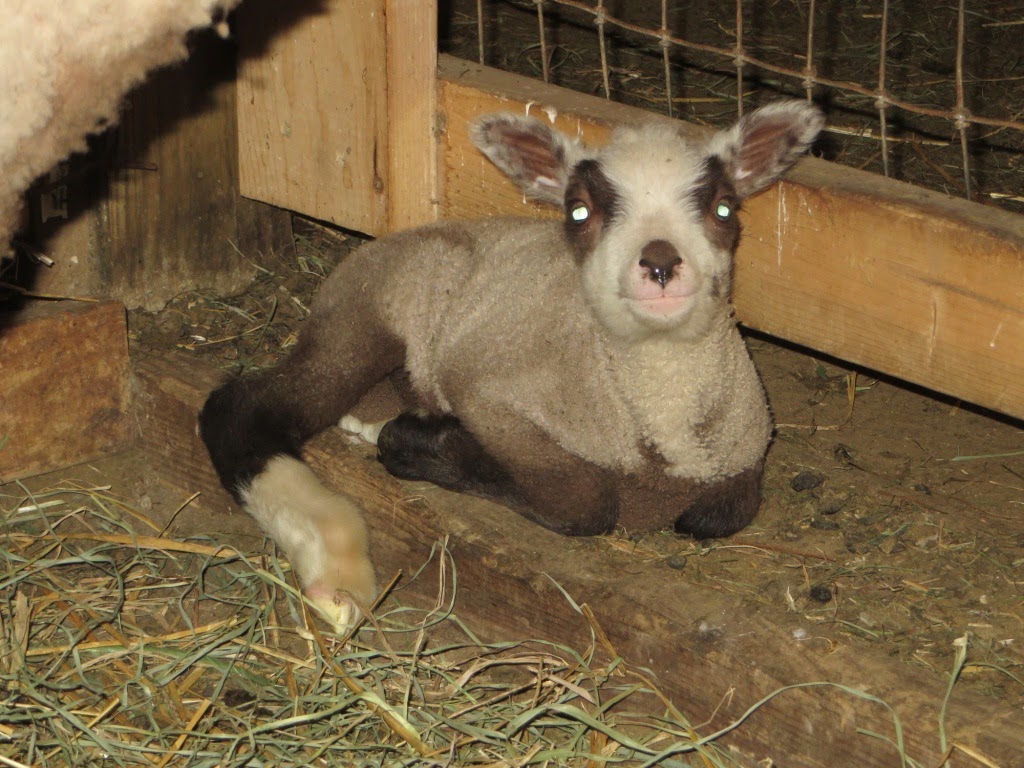 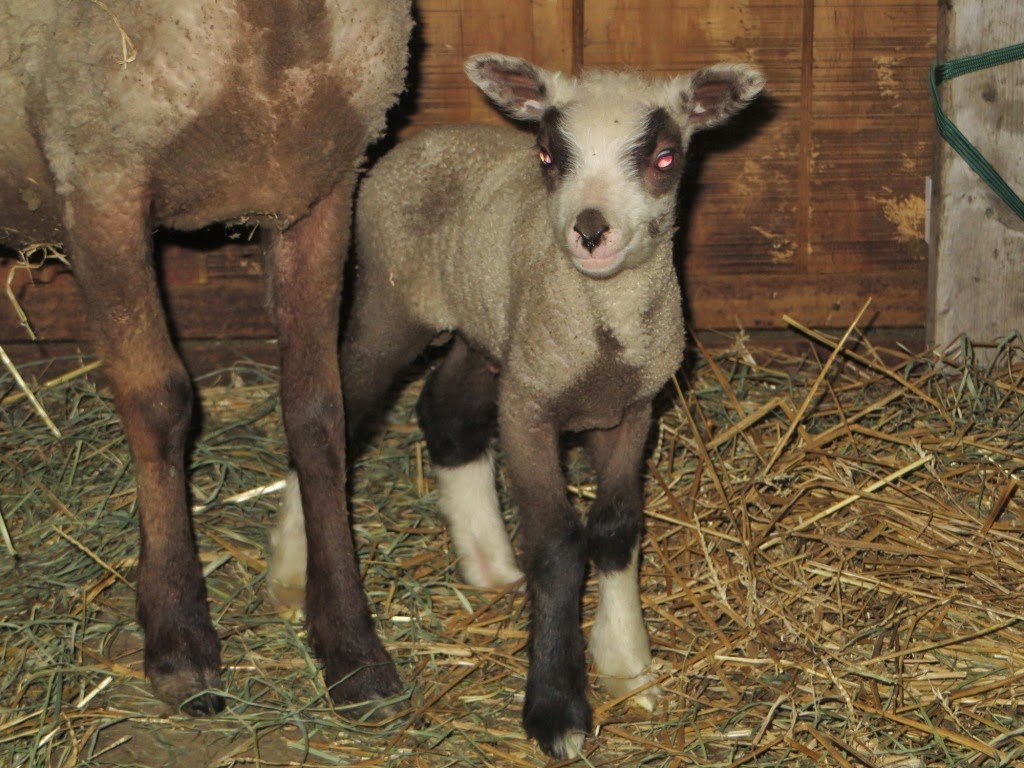 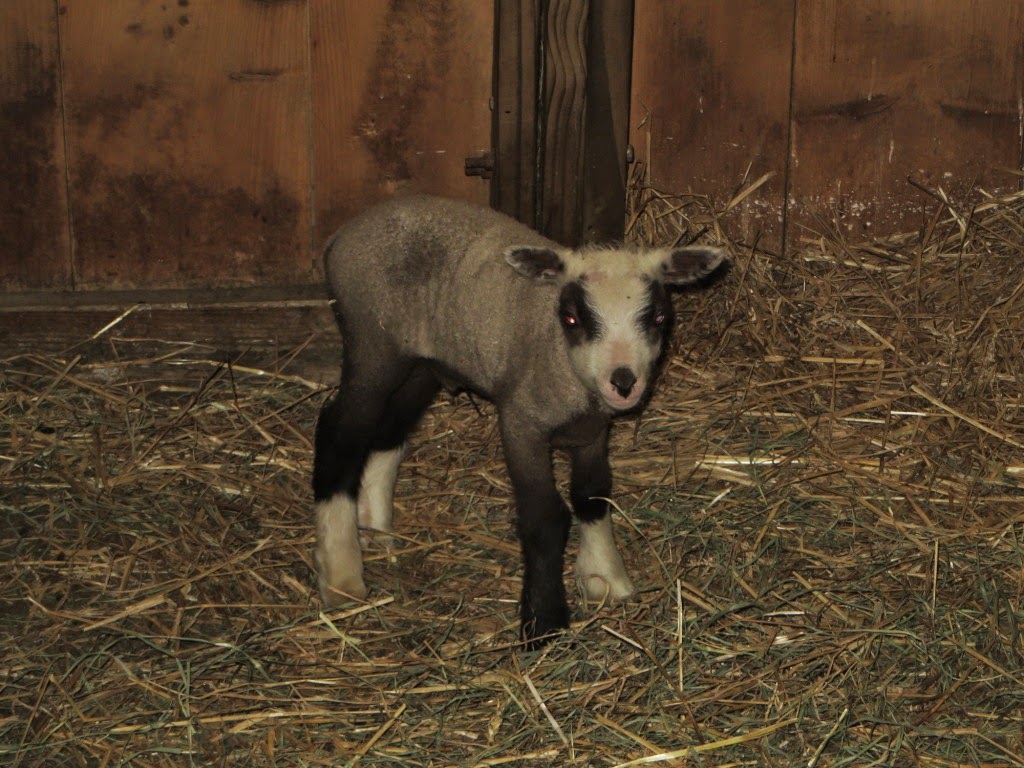 I didn’t realize Canterbury carries spots, but that’s a nice bonus, since I really would like to develop a line of super fine spotted sheep. The problem is that it’s difficult to produce spotted Shetlands that don’t suck. I like this guy. It gives us the potential to bring the top Shetland bloodlines together at some point in the future with spotted offspring in mind. A few people in the country have been able to do that successfully, but we have not unfortunately. It’s very difficult.


Next in line was Blue Sapphire on April 18th. Sapphire is an example of a successful spotted Shetland strategy, but one of the few that we have had. Keep in mind that our bar is pretty high for Shetlands, so we have produced good spotted sheep, just nothing that measures up to her. She’s kind of our gold standard for spotted Shetlands. Her fleece consistently commands a high price. She is out of Blues Clues, who was out of Wintertime Blues, an F1 Jericho. That’s a bloodline that I really like, which is why she is so valuable to us. You won’t find a better spotted Shetland in the Jericho bloodline.


She had two ewe lambs this year (big smile) and both have great promise. 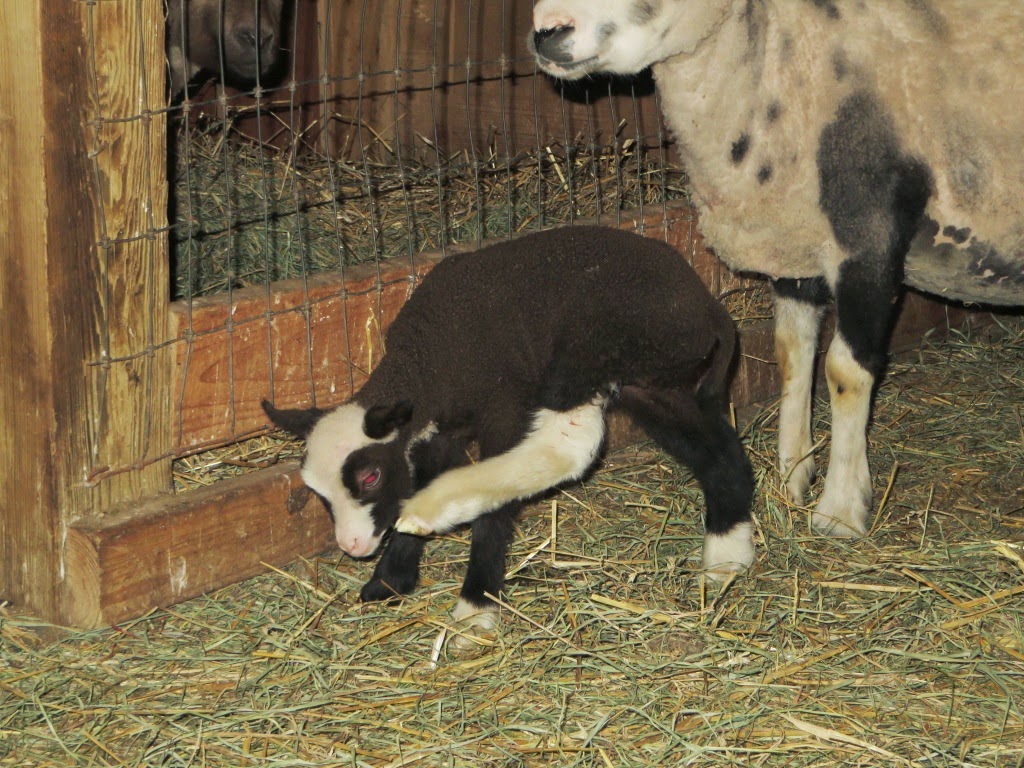 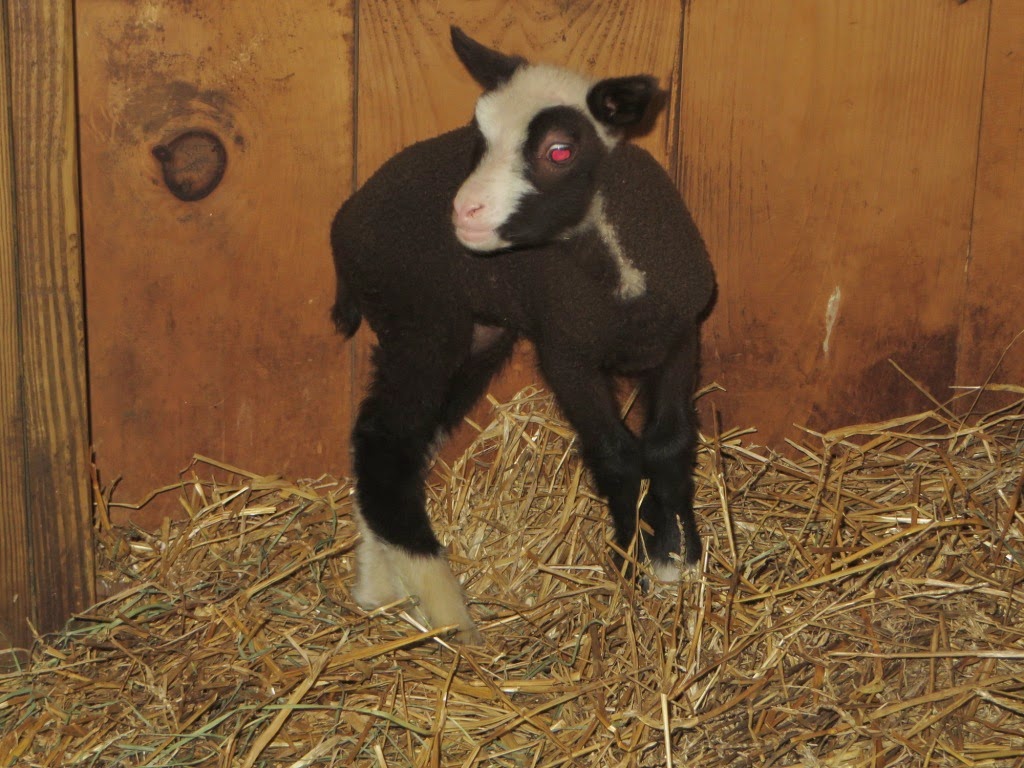 The moorit is a smirslet sokket, who arguably has the nicest brown fleece that we have lambed here. You never know if a fleece will mature as nicely as you think it will, but this one has promise. 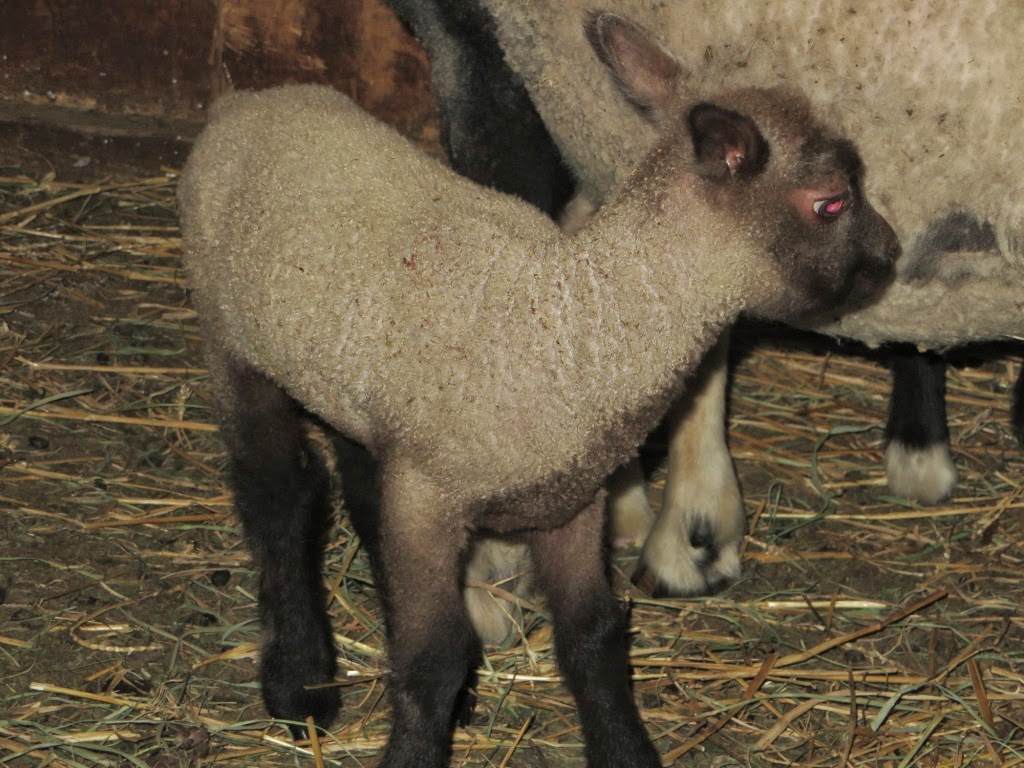 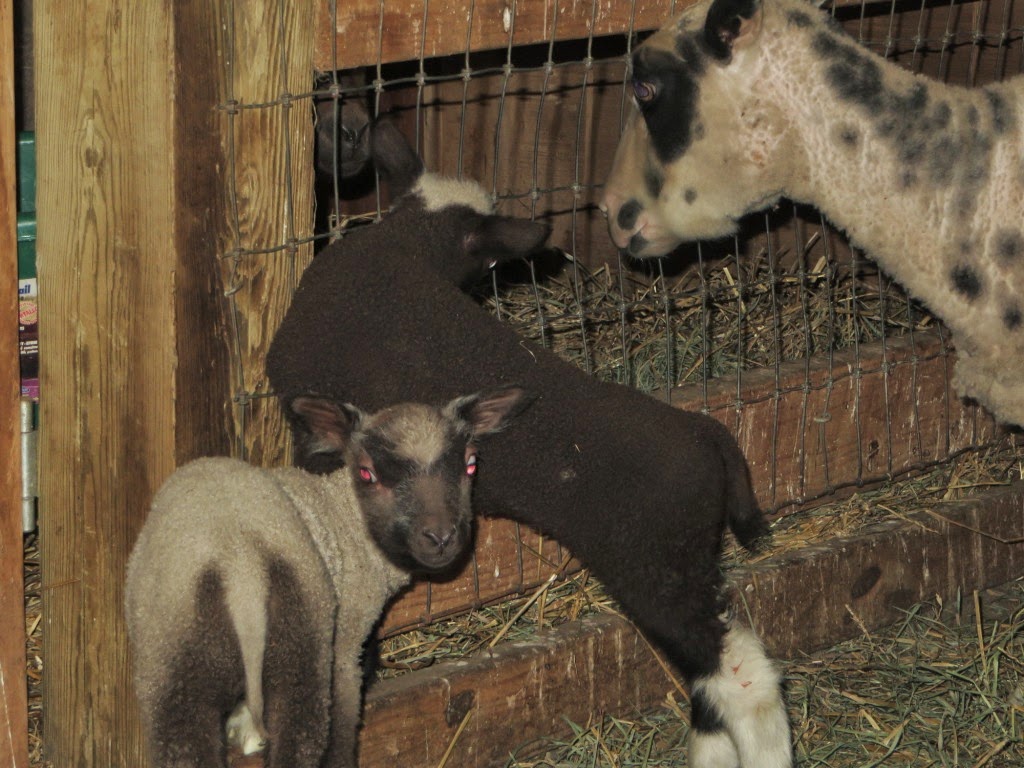 Her sister is a fawn katmoget, perhaps even nicer. I find that the katmoget fleeces tend to be nicer than the unpatterned ones, but I don’t have a good explanation for that. In this case, however, it’s close. Very pleased with these lambs because there’s the potential to get Sapphire’s strengths AND Canterbury’s in one sheep. These are the best lambs that Sapphire has produced, except maybe for Egyptian Autumn, her first lamb.


On April 21st, Whispering Pines Florence (another Pompey daughter out of Blue Sapphire…see what I am saying) produced an absolutely stunning fawn katmoget ewe lamb out of Canterbury. Pearl was probably the best ewe lamb ever born here, but this one is even better. 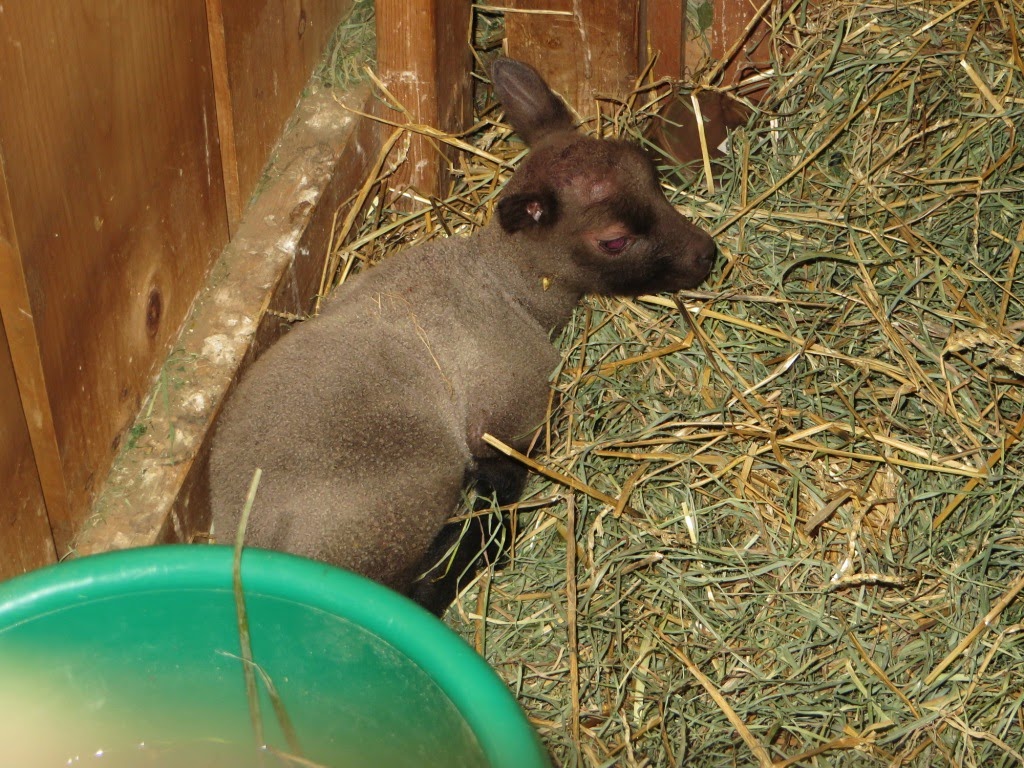 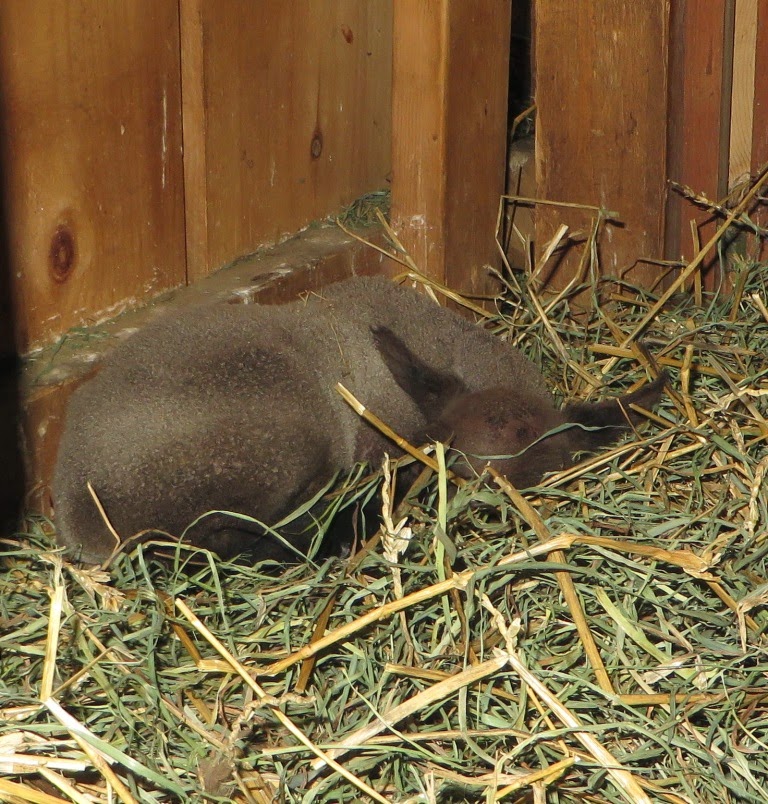 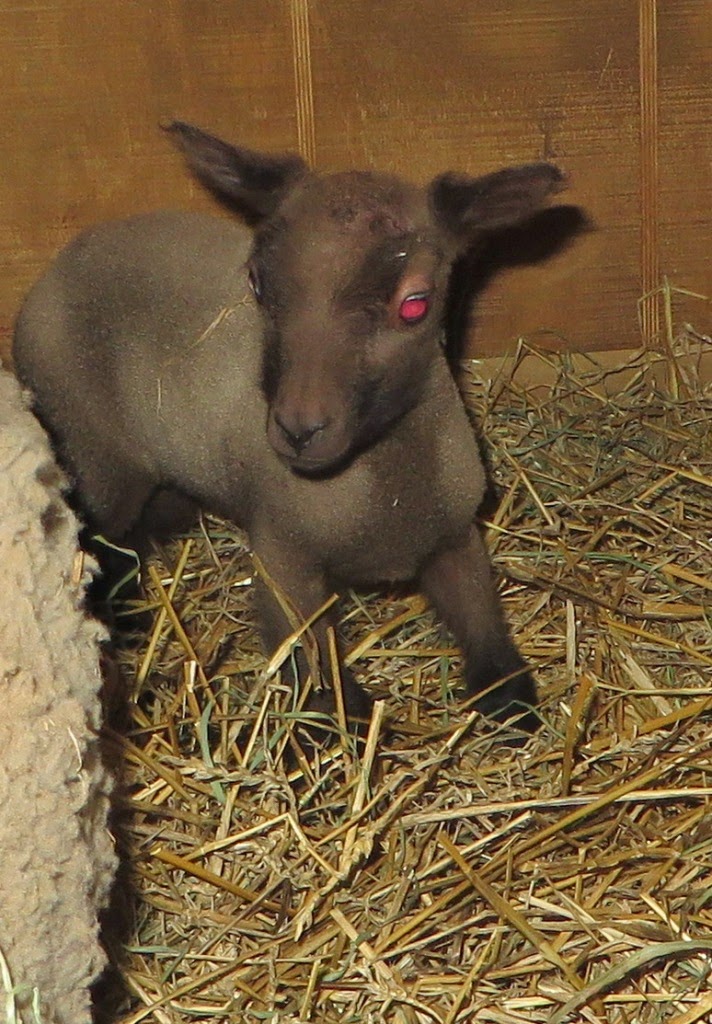 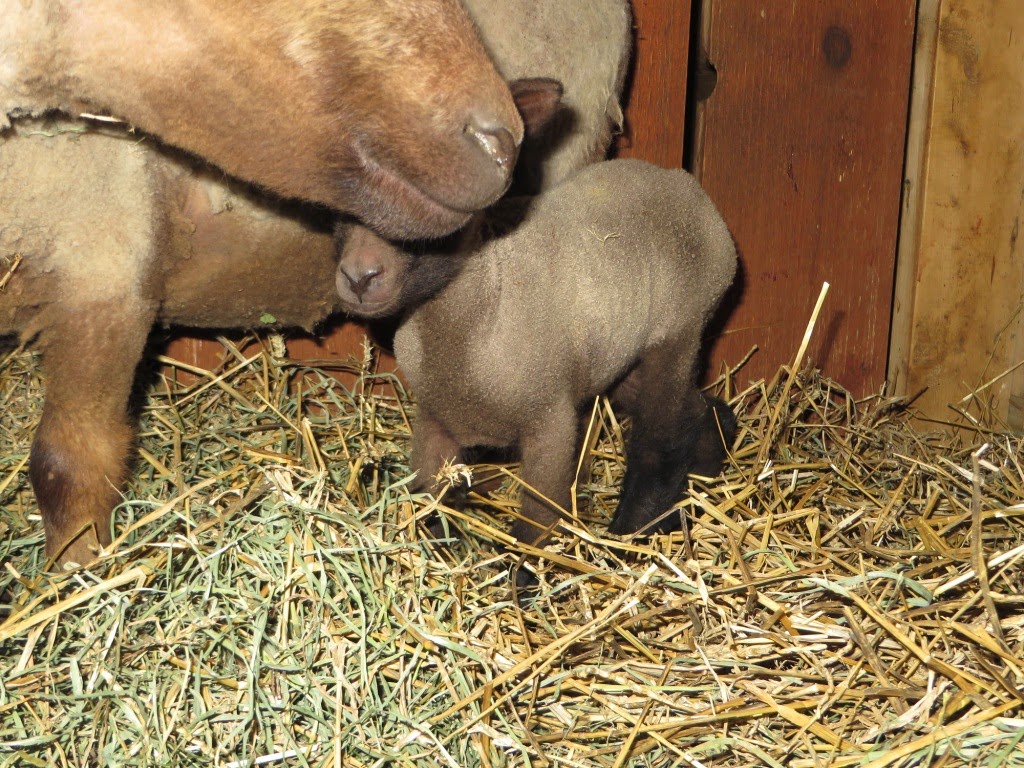 Her fleece is like velvet. I love this ewe lamb! You might ask how one can know how lambs over history rank against each other, and I don’t have a good answer except to say, you just know. It can’t be measured at this age, you just know.


Vittoria is another fawn katgmoget ewe out of Pompey and Sommarang Isla. She had an identical twin that we still own and I like both of them still. Vittoria has matured nicely as a two year old and this is her first lamb. 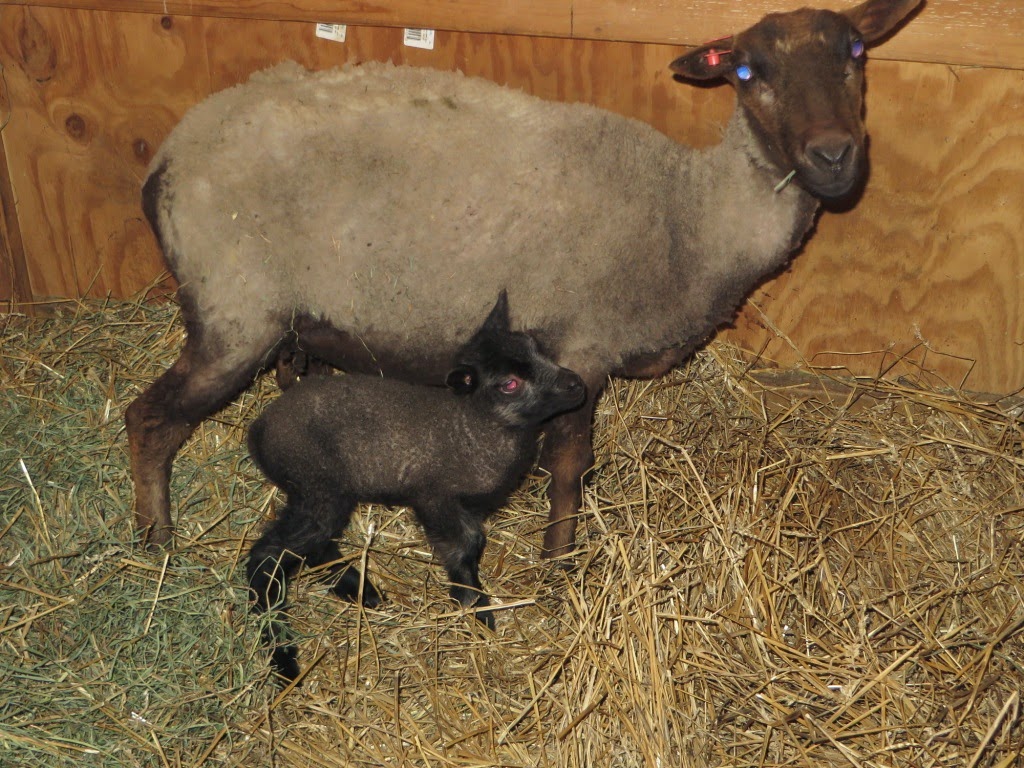 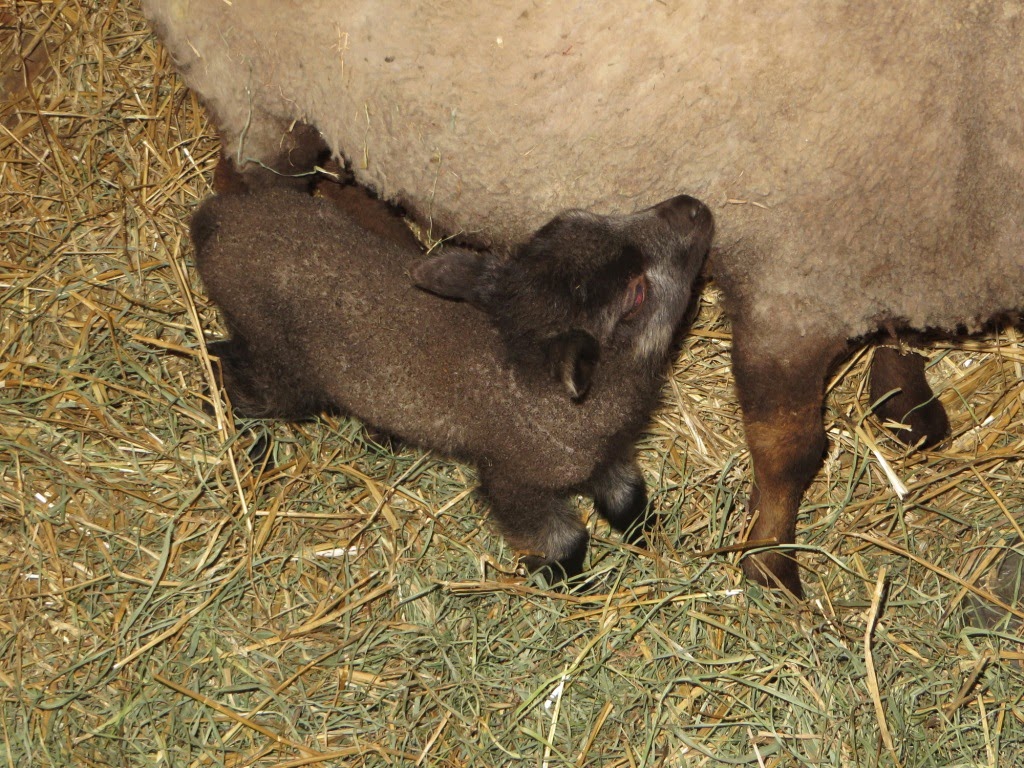 This very dark chocolate fawn katmoget ewe lamb is also out of Canterbury. No spots, but the quality is excellent. I would say this lamb is much like her mother was as a lamb, but slightly finer.


This is the funny thing about Shetlands. You can see that we have a lot of fawn katmoget ewes, but you get a lot of variety within that bucket. The fleeces are different colors and types. Now none of the fleeces are the shaggy North American Shetland type that you see, but they would look right at home in the breed’s homeland in the UK, which is what we are after.


This dark chocolate color is a Pompey attribute that I like. The grey katmogets are often the same way. It’s clearly genetic because we get it quite often.


Winter Sky Vogue is one of our best moorits and she had two very nice lambs on April 22nd out of Canterbury (he was a very busy ram during the first few days of breeding season…apparently). Vogue came to us from Karen Valley’s farm in the upper peninsula in Michigan and we have always liked this ewe. Good brown Shetland ewes are very rare. Great ones are anyway. 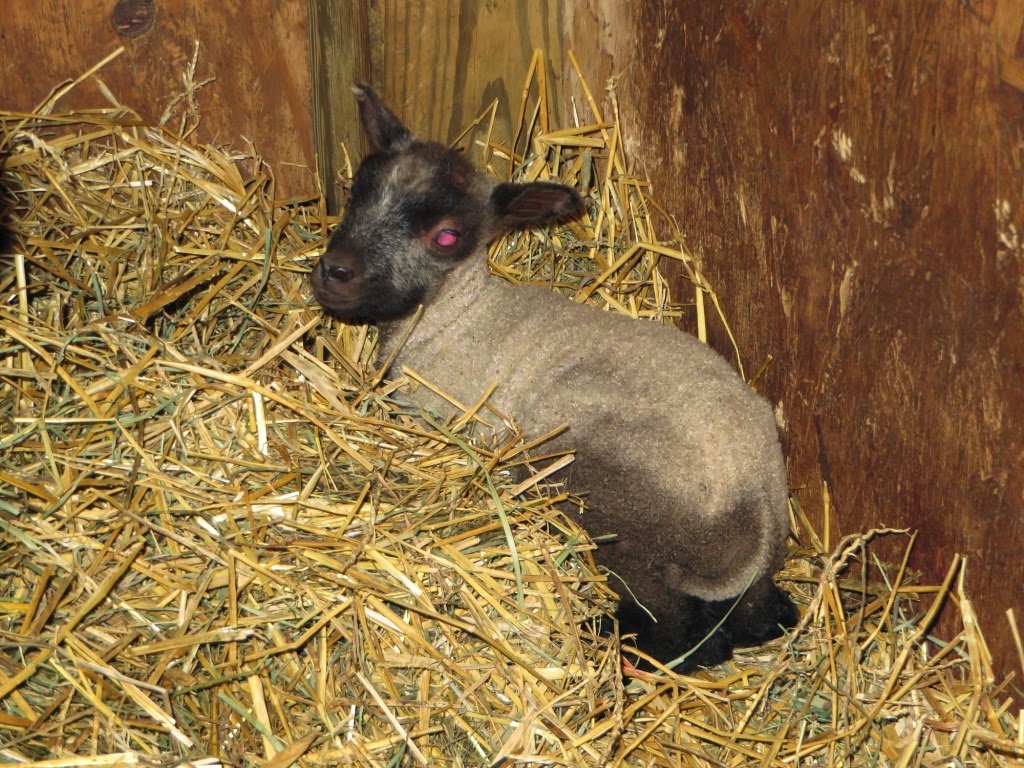 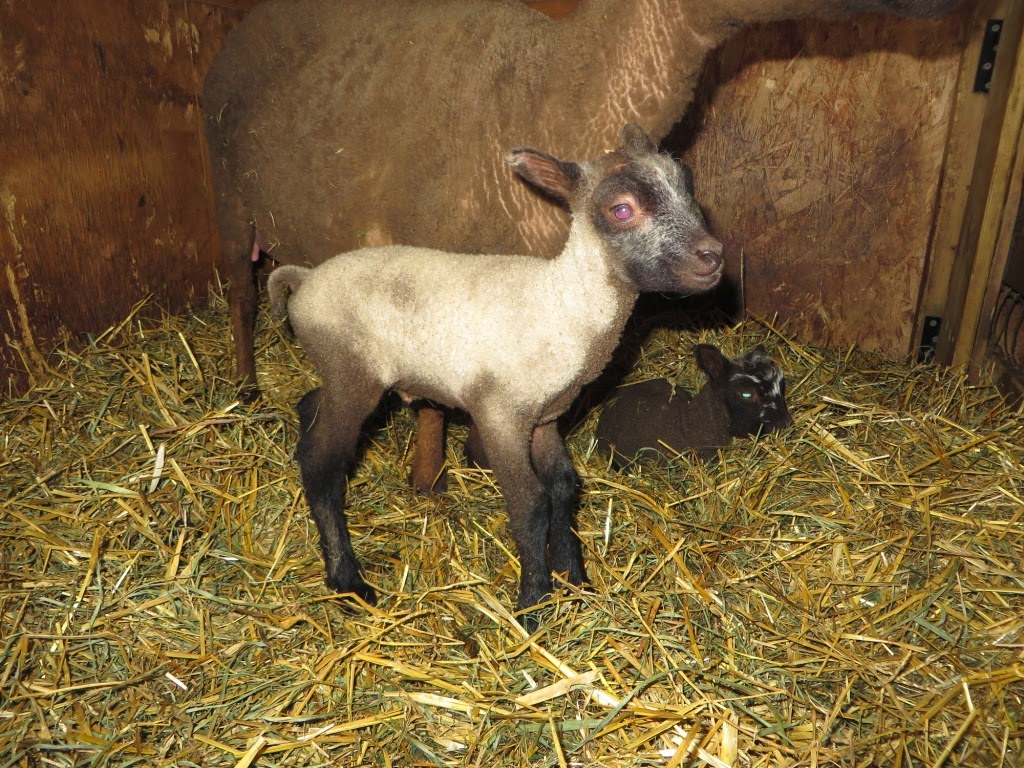 The fawn katmoget ram came first. Notice how light his fleece is. That’s the difference between Pompey and other rams. But I like the diversity in color and this ram lamb is excellent! I really like him. He will be polled. 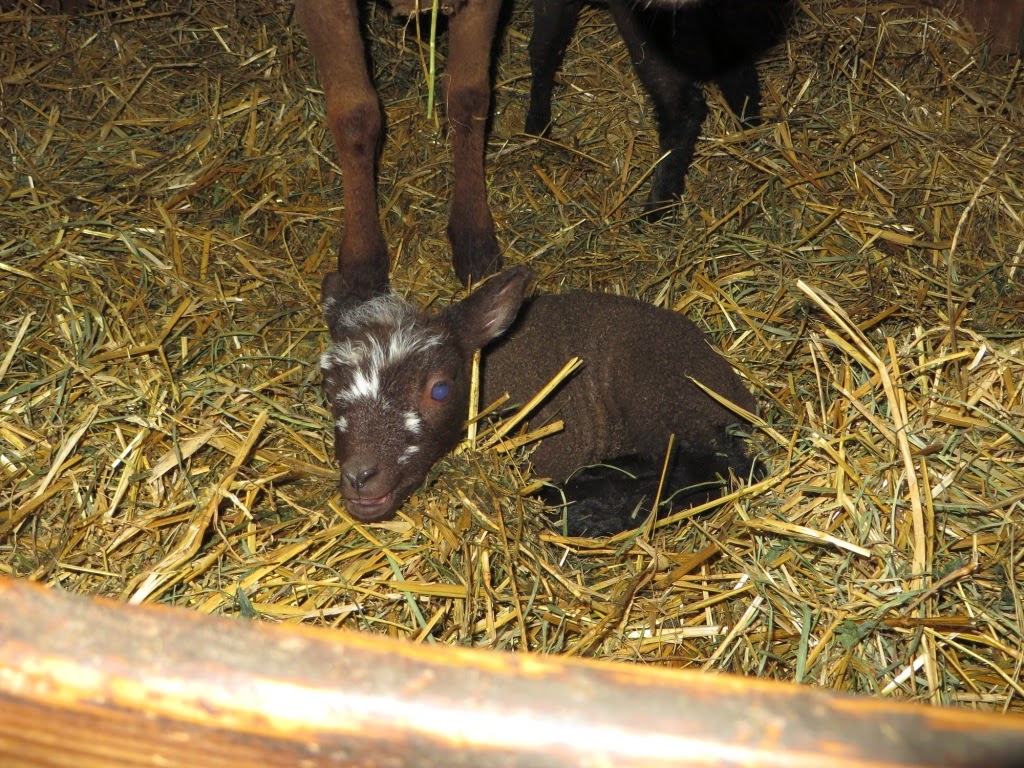 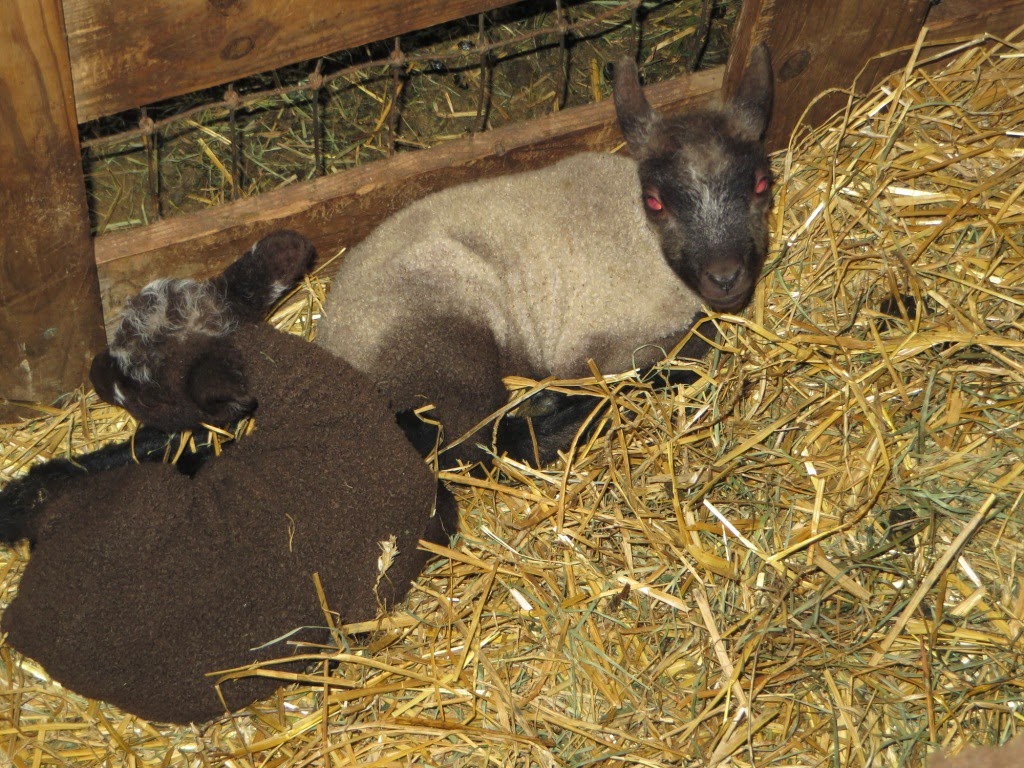 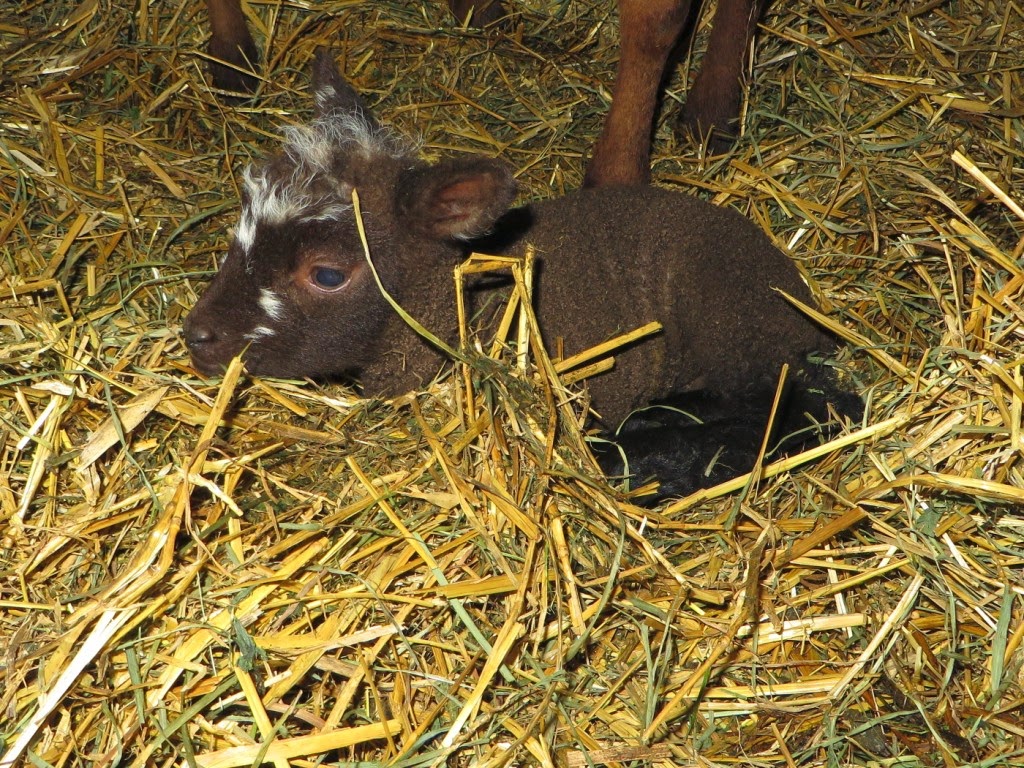 The ewe lamb is moorit and also very nice. I think she compares favorably with Blue Sapphire’s moorit ewe, but they are both superb examples of what the Shetland breed can be (but often isn’t).


Venice also lambed later on that day, giving us a very nice fawn katmoget ram. Notice he is darker. That’s because Venice is also a Pompey daughter. 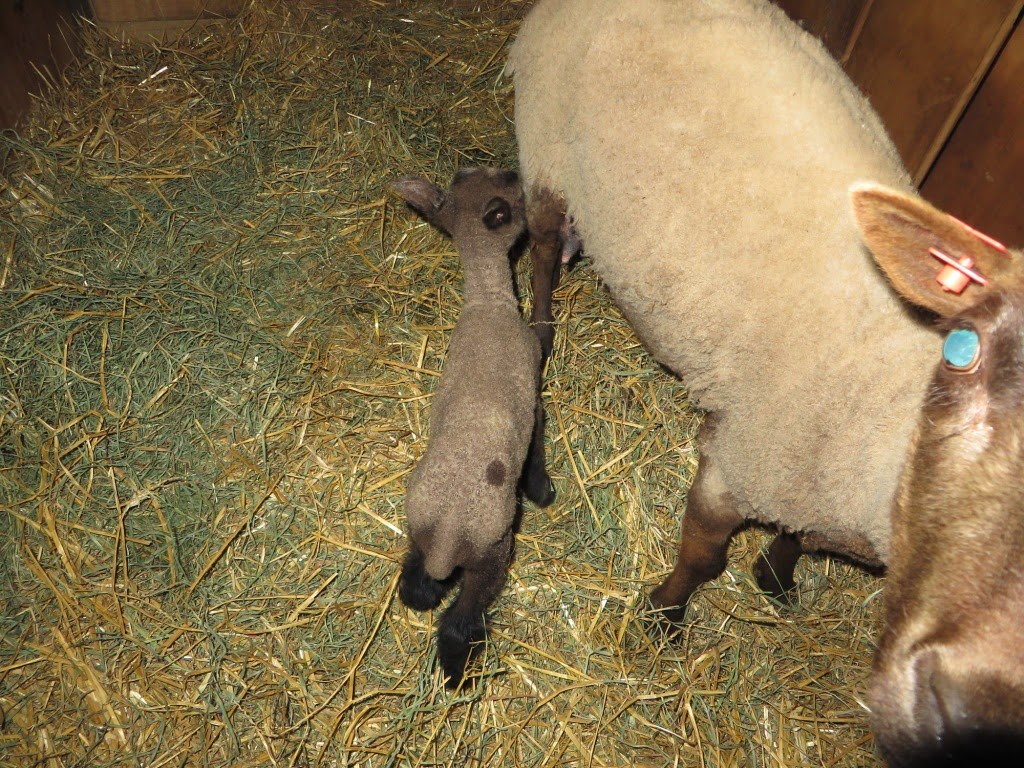 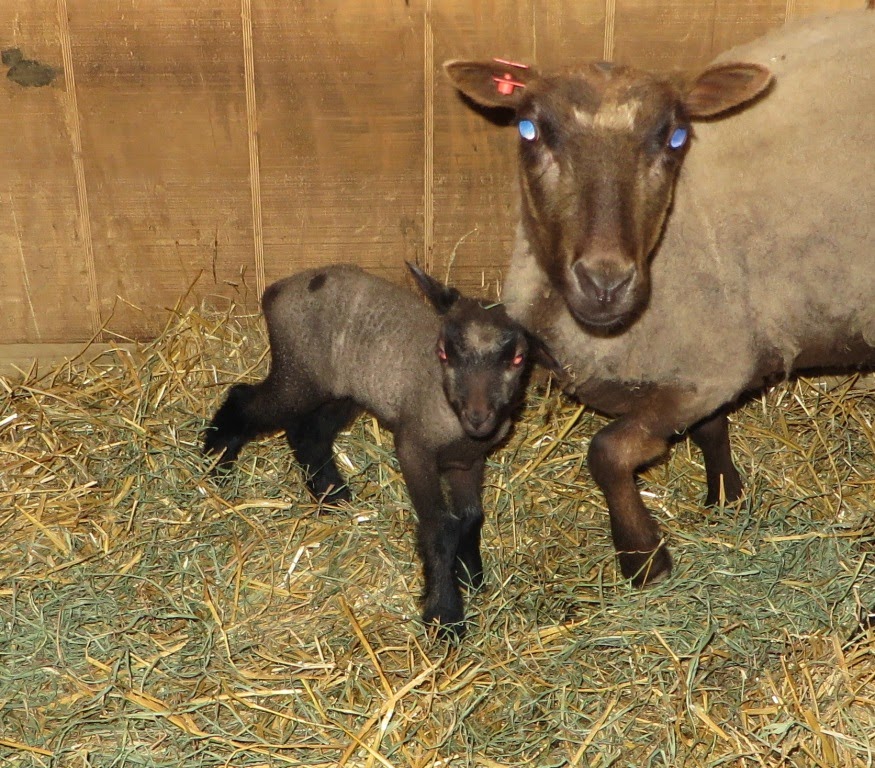 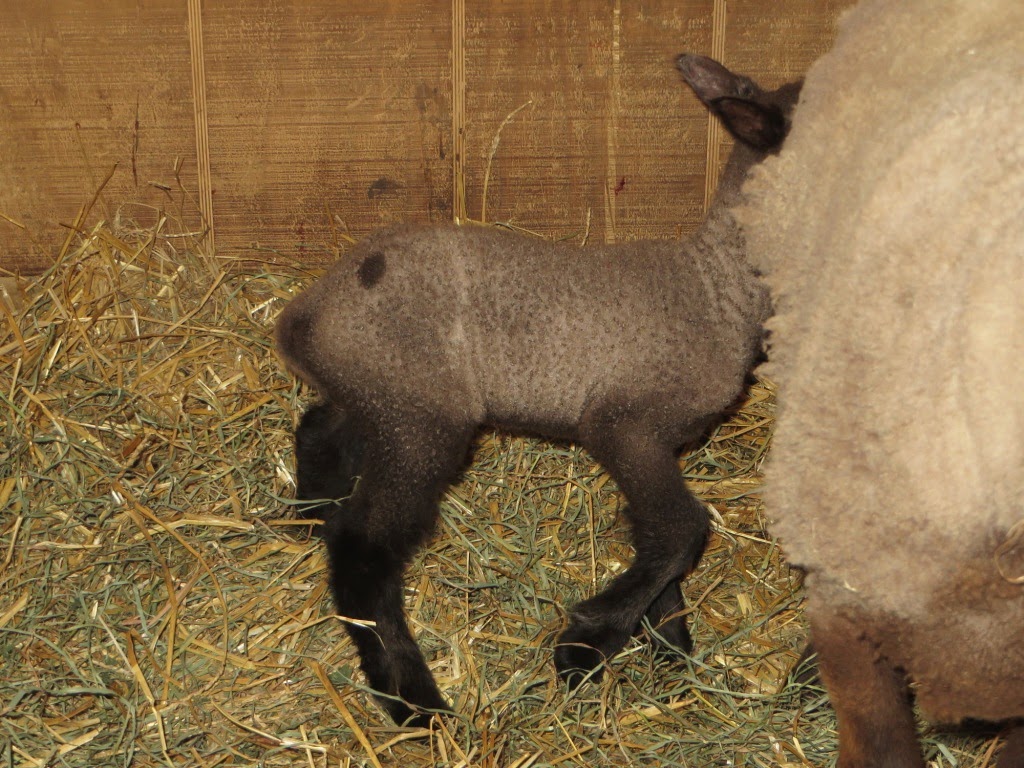 That brings us up-to-date. The lambs so far are the best we have had in the 14 years we've been doing this, which is always the goal. It gets tougher each year, however, to produce lambs that are better than their mothers. The mothers are the best-of-the best that we either have been able to produce or find. Our goal each year isn’t to produce the finest Shetlands on the planet, but rather to create sheep that are as correct to the standard as they can be. You never want to lose sight of the fact that Shetlands are famous for being the finest of the British breeds, but they are not Merinos either. After doing this for years, in my opinion, the best Shetlands will have fleeces around 3” – 4” as adults with average microns in the mid 20’s. The key is to maintain correct lock structure as well as the myriad of other fleece characteristics. It’s rare for us to get low 20’s microns without losing the other things, but that could be the bloodlines that we have. It’s equally rare for us to have 5” fleeces that have good Shetland properties.
But that’s a topic for a future blog post. The key right now is that we are still progressing toward our goals and I am very pleased with this year's lamb crop so far. Who knows, these may be the best lambs that we ever produce here. Like I said, there has to be a point where you strike the balance and can then focus on things like color and spots. There’s always something else you learn each year about Shetlands, however. Another layer to the onion, if you will.
Posted by Jen and Rich Johnson at 6:34 PM No comments: