Lambs we are keeping - Rich

Well, we’re officially in the dog days of summer (whatever that means). Like much of the northern part of the country, we have been relatively cool this year. It’s been like one extended spring. That makes sense, because the winter extended into spring more than usual as well. Will the summer extend into fall?
Some of the farms have been late cutting hay this year. I would say at least three weeks late in many cases. That results in a first cut product that our sheep won’t eat. As a result, we don’t have any new hay yet.

I wanted to take this opportunity to blog about a few of our favorite lambs this year:

This is Bluebell and Leyland’s ram. 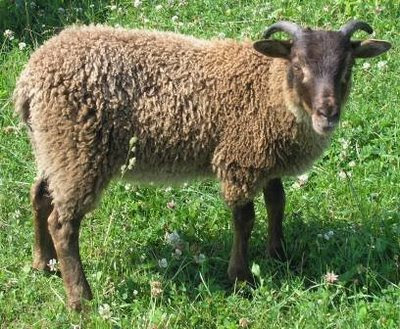 He’s really developing nicely. We’re going to hold onto him until we get a micron test this September, then we will decide if we are keeping or selling him. If anyone wants dibs on him, let us know and we’ll give you the right of first refusal. I don’t think he’ll be 20 microns like his father, but I do think he’ll have a nice test. His color, fleece type, and conformation really stand out in a crop of very nice lambs this year! I also believe he’ll have a full rack even though his father is a half poll. I bred Leyland to ewes that I knew lacked the polled gene. This guy is going to be fawn. At one point, it looked like he would be mioget, but now I don’t think so. I realize a lot of people would register him as a dark mioget, but I think he’s technically a fawn.

Why do I say that? Because here is a true mioget gulmoget. 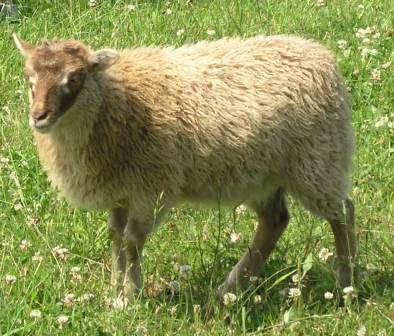 See the difference? This is a gulmoget ewe out of Bluebell’s mom, Tiara. Her father is Clover. We just love this girl! She’ll have an intermediate fleece.

Next is one of Cor de Nuit’s twin rams. We are very pleased with these rams. Both are very single coated (from their mom) and built like greek gods (although none of the greek gods were sheep…that I’m aware of).

This guy is black (duh), but carries spots. 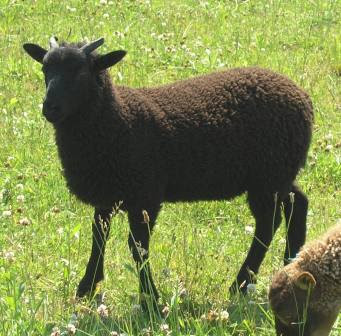 I’m not sure whether he carries brown. He has small scurs (again, from his mother). I don’t know if we’ll use him this fall or not. I’d like to. He has about everything we’re breeding for.

His brother is also structurally fantastic! 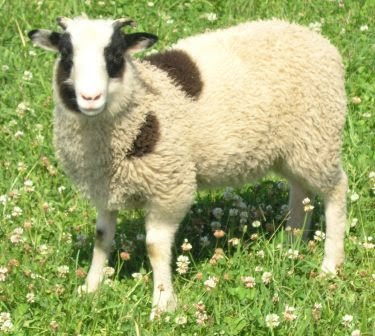 I think this guy is an improvement over both parents at this point. He seems to have inherited the strengths from each. He’s certainly the best spotted ram we’ve ever owned! I don’t know whether we’ll use him this year either. We have an abundance of black based sheep and really don’t want to add a bunch more to the mix. But he’s pretty amazing! I can’t find anything wrong with either of these guys. I’m not nuts about scurs, so maybe that’ll end up being the fly in the ointment, but I don’t see anything else. Both are two months old now, so now’s when we normally start to find flaws in stuff. So far, so good with these guys.

I like the bloodlines with these two as well. We took the best of what we liked in domestic lines (Cihat) and crossed it with some UK content that we liked (Cor de Nuit). I would imagine that the results of such crosses would be hit or miss, but I think this one was a definite hit.

We did the same thing with Fantasia and ended up with these gems this spring.

These yuglet sokket katmoget ewe lambs are singled coated, dense, crimpy, and just fantastic! We liked them so much that we felt we could sell Fantasia! The lambs inherited much of their looks from her, but they do seem to have their father’s great tail and spotting. Very nice lambs! 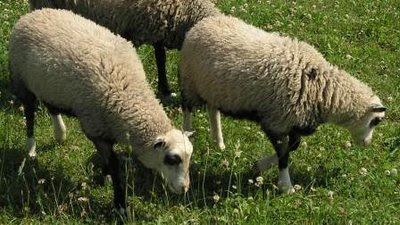 Here is another great little ewe lamb out of Onyx Velour and Cihat. 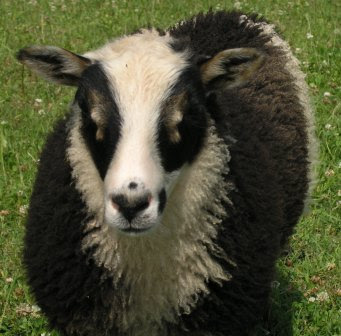 Again, we went for the domestic/UK cross. She’s a yuglet sokket gulmoget who looks very much like a caped flecket. She has a nice fleece, even though it’s not exactly what I’m after. Like I said, you can’t nail it every time. I do think she’ll be intermediate, but I’m very interested in seeing her first fleece test. Her father actually has a lower CV than her mother, but both have excellent micron tests. Both have sub 25% CV’s, which is what we’re after. It just results in a much nicer spinning fleece!

Last but not least, is Buttercup and Leyland’s fawn gulmoget ewe lamb. She’s probably my favorite this year! She’s built extremely well (thanks to our dear little Buttercup), and seems to have a fleece that we are targeting! She’ll also be intermediate, but she is very uniform. All of the above lambs are that way, even though their fleece types are very different.

One thing we learned this year is that Leyland is a gulmoget factory. He’ll always throw gulmogets regardless of who he is bred to!
Posted by Jen and Rich Johnson at 8:41 AM

Leyland is going to donate a poll gene to half his lambs no matter who he is bred to; if those are "normal horned" ewes you'll still get scurs (or Pp ewe lambs) about half the time. That first guy's horns look "light" with a narrow base of horn separated by a lot of head. To me he looks half-polled, but I could be wrong.

Beautiful lamb pictures esp. that mioget gullie!! Wow! Your fleeces also look wonderful:) It is always so hard to decide on who to keep & who to sell...I really need more land!

It's funny that you said that, because that's what I thought when I saw the picture today. Maybe he is a half poll. He doesn't look it in person, however.

It is very hard to decide who to keep. We've gotten to the point where we like our entire flock now. I wouldn't say all of them are perfect shetlands, but we would breed with any of our ewes without hesitation. As I lay out breeding groups for this fall, I can't imagine having any lambs next year that we won't want to keep.

Enjoyed your blog. Your sheep are cute! (And very pretty:-)

Your sheep are beautiful..question for you..can you dye batts of wool, or only after they are spun..I am thinking of buying even more wool for spinning, but I love the way handspun looks when it is dyed first and then spun, seems like a lot more color interest to me. But if you put the whole batt in a pot, the dye isn't going to get to the middle right? So do you take it apart and dye smaller bits individually?